It is 31st of January, the day Britain leaves the European Union, and two travelling companions on the flight from Manchester to Milan sit in silence. The arrival of in-flight meals, however, loosens our tongues and we discover that, despite our age difference, we have much in common. We both are teachers and we both were raised on an obscure north-western peninsula which juts out into the Irish Sea. We exchange reminiscences of football and convent schools in Birkenhead. She talks of her twin sister  who, like her, rebelled against the authoritarian nature of a school system that could not understand why a teenager would want to wear odd socks. I confide that, coincidentally, I am, in fact, wearing odd socks; something I do because it reminds me of my own daughter’s unconventional fashion choices.


She asks me why I am visiting Milan and I explain I am going to a conference.

We part company as Ryanair offloads its passengers and we follow our separate paths into Italy's most fashionable city. As I finally arrive at the Marriott hotel, I read a notice explaining that Milan will ban all cars from driving within the city this weekend, a measure aimed at tackling high pollution levels. I check the time on my watch; it is after midnight GMT, which means that Brexit has finally broken.

Welcome to the 21st Century, I think.

The conference I have come to attend is for SPAEN, the Sarcoma Patients Euronet, a continental coalition of cancer patient advocacy groups, which is also well-connected with the research community and industry. The annual gathering therefore reflects a good range of lay and professional perspectives, and this year it has partnered with ESMO, the European meeting on adult oncology, which runs immediately afterwards in the same Milan location.

The European epithet no longer adequately describes the global nature of the annual SPAEN event. Transatlantic connections are represented, not only through the US Sarcoma Coalition, but also the SELNET project which has extended links to Latin America as far as Chile. South Africa also makes its mark in a pre-breakfast (!) session, in which Lauren Pretorius lays down standards of excellence for patient organisations. Other stand-out sessions, from a patient perspective, include Amy Bruno-Lindtner, a language specialist from the University of Vienna, on ‘Techniques for sharing information in a patient-friendly way’ and psychologist, Lesley Storey, on the measures developed at  the University of Birmingham for reflecting patient experience. The comprehensive nature of the patient advocacy perspective, however, is probably best demonstrated by Roger Wilson’s paper on ‘The challenge of sarcomas,’ which offers an overview of developments in research, treatment and the wider care environment - well worth a read.

A final indication of the can-do nature of this assembly is that my own session on age-inclusive research, late on the Sunday afternoon, is greeted with a commitment to adopt the FAIR Trials objectives as SPAEN policy, an offer also taken up by Sarcoma UK. 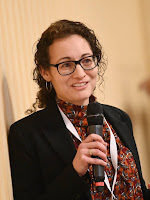 
The Sunday ban on traffic in Milan unfortunately fails to prevent smog enveloping Linate airport that evening, holding up flights out of the airport, including my own. Catching a connecting flight in Brussels therefore involves a half-K sprint  across the airport concourse. As I pursue a slalom course through the duty-free fragrance counters, it occurs to me that, although I am returning to the UK, I am not leaving Europe. For this weekend has brought home to me that Europe is not a political entity, but a state of mind - and one that I do not expect to lose any time soon.